skip to main | skip to sidebar

My trip to the NEW Yankee stadium. 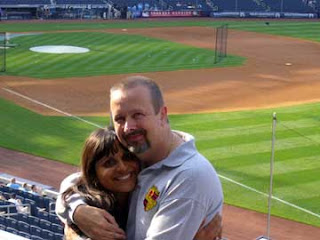 Last month was my birthday and my DH got me a really neat present. Six tickets to go see the NEW YORK YANKEES at their new stadium. If you are a Yankee fan of any sort you have heard that they have a new stadium this year. Well for my birthday I got to go see it with my family. In fact DH got an extra ticket so I could take my BFF with me.

Ride in was great, some traffic along the way but with hubby at the wheel and some smooth maneuvering not to bad getting in to the city.
Parking was a breeze and then across the street and up the escalator right to our seats, which were thankfully under cover perfect in case of rain. It was a sort of pretty day with chance of rain (so what’s new) but it held out for the most part. There was a 25 minute rain delay at the start due to sprinkling but the rest was smooth sailing. 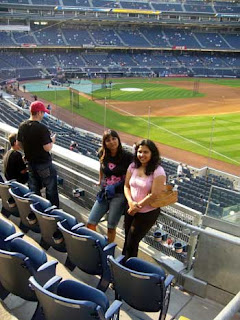 The stadium itself is BEAUTIFUL. You can walk along side the entire stadium and pretty much see the game from any section without sitting in a seat. The food court is just amazing, along with the usual hot dogs and burgers and baseball food there was falafel, noodle bowl, Mexican food and my favorite sushi. I mean really where can you see a Yankee game and eat sushi at the same time but in NEW YORK CITY.

During the course of the game we ate ice-cream, did the 7th inning Cotton Eyed Joe, danced to the YMCA with the cleaning crew and even joined in the stadium wide wave. It was a great outing and I am so proud of my hubby for making my day so special. Thanks Honey you really know how me make me happy. Sorry about screaming out into your ear the whole game, but you know the players are so far I have to scream so they can hear me LoL. 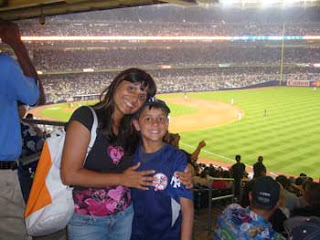 Oh yeah about the game, on the mound was CC Sabathia and we played the Seattle Mariners. We lost 8-4, and Mo did not come out in the 9th inning but none of that mattered. I had my Hubby, my kids and my BFF and the Yankees all in one place at the same time. What else could you a girl want for her 41st birthday.

How did you celebrate your last birthday ?

at 8:24 PM No comments:
Labels: Pursuit of Happiness

One of my goals for the year is to read 52 books , that's one a week if you are counting. With 3 kids it not so easy and so I am always looking for interesting books to read. So far I am making good progress on my list. Here are a couple that I just finished reading.

Description from Amazon -
In Malladi's third novel, following A Breath of Fresh Air (2002) and The Mango Season [BKL Ap 15 03], the characters keep referencing "bad Hindi movies." Indeed, the plot of this very readable novel does resemble something out of Bollywood, but the characters are drawn so clearly and strongly that readers will immediately be taken by the triumphs and tribulations of the Veturi family. Devastated after being fired from her job at a Silicon Valley start up and suffering a miscarriage, Devi feels she has strayed far outside the expectations of her traditional Indian family and attempts to commit suicide. However, her intrusive mother, a continual source of aggravation for Devi, saves her life. Devi then moves in with her parents, but she refuses to speak, taking up cooking instead. Channeling all her emotions into the elaborate meals she prepares, Devi prompts her family to engage in a series of completely honest conversations that draw all of them closer to each other. A reading-group guide is bound into this heartfelt novel, which also provides a candid snapshot of fractious mother-daughter relationships.

I’d say this is an easy read, gets you invested in the characters. It has a “Bollywood” type plot and gives you a humorous insight into the Indian culture and the relationships between mothers, daughters and fathers. Warning: reading about the cooking parts makes you hungry for Indian food. I’d give it 2.5 stars out of 5.


I Am Not Sidney Poitier: A Novel


Description from Amazon -
Everett's latest tells the story of a young man named Not Sidney Poitier who bears an uncanny resemblance to the famed actor and is adept at deploying a hypnotic technique called Fesmerism. When Not Sidney is young, his mother dies, but not before becoming an early investor in Ted Turner's enterprises. The boy then moves to Atlanta, into the home of Ted Turner. Despite his vast wealth and celebrity looks, when Not Sidney ventures out into the world as a young adult, he faces bizarre, stinging and potentially deadly forms of racism. While Not Sidney comes across as a likable and thoughtful soul, he's the perfect foil for the fictionalized Turner's stream-of-consciousness non sequiturs (I've never been struck by lightning. You?) as well as the logical absurdities that pepper the speech of his university professor who happens to be named Percival Everett. Not only is the novel smart and without a trace of pretentiousness, it shows Everett as a novelist at the height of his narrative and satirical powers.

Again another easy summer read kinda bizarre and kinda funny. I’d give it 3 stars out of 5.

I just started reading The Queen's Bastard: A Novel


I will add a review when I am done. So far so good, if you like the Tudors, or Anne Boylen you might like this book.

Description from Amazon –
Maxwell's second novel (after The Secret Diary of Anne Boleyn) breathes extraordinary life into the scandals, political intrigue and gut-wrenching battles that typified Queen Elizabeth's reign as seen through the eyes of Arthur Dudley, the man who may have been the illegitimate progeny of the Virgin Queen and her beloved Master of the Horse, Robin Dudley. Arthur's first-person narration is cleverly juxtaposed with third-person dramatization of significant events in the queen's life, bringing an intricate authenticity to the possibility that Elizabeth gave birth to a bastard son. Maxwell's research examines the biographical gaps in, and documented facts about, the queen's life, making this incredible tale plausible, and the author aptly embellishes her story with rich period details and the epic dramas of the late 16th century. Switched at birth with a baby's corpse by a lady-in-waiting who foresaw the disastrous political consequences of a royal bastard, the infant is raised in the English countryside, where he is abused by his adoptive mother. Only his adoptive father, Robert Southern, knows his true background, and it is only when Southern lies dying that he reveals the secret to Arthur. The circumstances leading to Arthur's reunion with his father and finally his mother range from the young man's military training in Wales and encampment in the Netherlands to his post as a spy in France, Italy, Spain and Portugal, all played out against the backdrop of England's defeat of the Spanish Armada. The novel falters only with an abundance of references to Anne Boleyn's diary (coy allusions to the author's first novel), but this minor affectation defuses none of the powerfully lascivious intersections of sexual and international politics that, combined with Maxwell's electrifying prose, here make for enthralling historical fiction.

If you have any book recomendations for me leave me a comment I'd love to try them out.

I am – working really hard on trying to over come my fear of water and swimming. Its one of my 52 goals for the year and I am starting on it. Yesterday I went in the swim lanes in our lake and swam 4 laps in DEEP water on my back. Hurray for me !

I am thinking – about my oldest son who is away at Boy scout summer camp for the week. I hope is doing alright and is having fun with his merit badge workshops.

I am wearing - gym clothes as I am plotting to find a way to get to the gym today. Have not been there in several days. Its harder to get there now with the kids home for summer.

I am looking outside my window – and I see sunny skies.

I am reading – a book called Waiting: A Novel

by Ha Jin. He sets many of his stories and novels in China, in the fictional Muji City. I would say that Waiting is an interesting read if you are looking for something different. The title of the book kindof explains what its about. All 3 of the main characters in the book are waiting for something in their life. Makes you think of what you are waiting for and how life is just passing by while you wait. I am just starting on a second book by the same author called The Bridegroom: Stories

. This one is a collection of short stories. I like the writing style not sure I like the abrupt endings.

I am listening to – Fallin' by Alicia Keys.

at 9:35 AM No comments:
Labels: I am
Newer Posts Older Posts Home
Subscribe to: Posts (Atom)

Flower Car Lady
New Jersey, United States
I am a girl attempting to get the very best from what life has to offer. I also star in the role of wife and stay at home mom raising 3 neat boys. I am not 29 any more and I am loving being older and wiser and more comfortable in my own skin. This blog is for me to have a place to put my random thoughts out there and I trust me I have plenty. So follow along my journey as I go about on this pursuit of happiness.

Neat Blogs I am currently reading